Yashodhara Lal is an author, fitness enthusiast, marketing professional, mum and she has recently got her book published – How I became a Farmer’s Wife, published by HarperCollins.

She shares with Mums and stories on her life, her being a mom, her childhood and on her book. “I was an awkward middle-class kid with a middle-child persecution complex and I grew up in Delhi of the 80’s and 90’s. It wasn’t much to do with farms apart from the occasional summer holiday, but I have actually written a book (surprise, surprise!) which is due in early 2019, also to be published by HarperCollins that basically talks about coming of age during that era.

I’ve actually been primarily a marketing professional ever since I graduated from IIM-Bangalore in 2002. When I had my kids, I also had complications with the pregnancy that resulted in a re-evaluation of my priorities, and that’s when I decided to finally give a long-buried passion a shot. Best thing that ever happened to me! ‘Just Married, Please Excuse’ was published in 2012 and I’ve had many books after that. And I’ve circled after a sabbatical, experiments in consulting, Zumba, and am now handling a challenging full-time role leading marketing. It’s been a journey and I’m still learning how to balance it all.

Talking about being a mum to three kids she shares, “Well, it’s almost always crazy in my house, I don’t know about how others handle it. But while the three kids fight, they also keep each other very involved and engaged and are almost always hanging out with each other and that is actually a blessing. I think three is a good number, I’m one of three kids myself. My husband does sometimes say another daughter would balance it out nicely and badminton doubles would become easier, but I’m drawing the line now.” 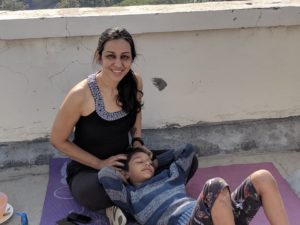 (Yashodhara with one of her kids)

Talking about how she got to writing the book ‘How I became a Farmer’s wife’ she shares, “ A couple of years ago, my husband decided to actually go for his own long-buried passion – the idea of dairy farming! While we went through that roller coaster of an experience, I never thought I’d actually write about it. In fact, at the time, I was under the impression that I should write only romantic fiction. But somehow, a time came when it all fit together in my head and I realized this would make a great follow through to my first book – which was also about marriage and family and relationships; but this time, a farm setting as a backdrop just made this book so much fun to write. It all came out in one sitting, which is how it happens sometimes for me.

The book is almost entirely based on experiences that we have gone through; however it is indeed fictionalized, and I always say about 7 percent of the story is fictionalized. Which that 7 percent is for the readers to guess at.

But I can definitely tell you that two of the characters are quite made up, and they are the ones who are a little greyer than the others, but that’s all I’m saying!

At the moment, I’m taking a breather from writing, but I’m sure when the time is right, my next book will take shape; first in my head and then on my laptop. I’ve given up on routines and trying to be disciplined about this. I think I’ll be fine!

So far everyone’s who’s read this book has talked about relatability of the characters, which is understandable as they are so close to any real life modern-family living in a big city in India today. They have also enjoyed the warmth and the humour in the story, but of course it is the experiences described of the farming life that most find an eye-opener.

I’m getting a lot of great reviews – I just wish people would read even more, and review books more actively. We’re all too busy these days to enjoy some of the simpler joys in life – and in fact, I think that’s the main message in the story; how to find that pause and appreciate what’s really around you. Ultimately, the book is about relationships, love, understanding. Just with a few cows and dogs and snakes thrown in!

The unstoppable Kalpana Rao from Pari’s

Sarika Giria on being a mum, entrepreneur and author

Suman Kumar on being a stay at home dad